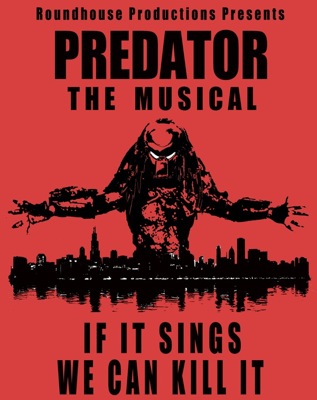 Since the original Predator was released in 1987, there have been four movies — with a fifth on its way — that have kept the fearsome, dread-locked alien warrior species in the cultural conscious. But every sequel, crossover film and reboot since the original has failed to capture the first Predator’s magical combination of suspense, absurd one-liners and greased up muscles. Recently the alien hunter with sophisticated tools has been pitted against aliens from another movie franchise, small town innocents and of course, Oscar winner Adrien Brody. But what made the original movie so memorable was the motley crew of meatheads who did battle with the hunter-from-another-planet. Rarely has a successful major motion picture ever brought the buff and showcased so many actors with negligible acting skills like the first Predator (there’s a chance the Predator character, who basically had no lines in the movie, was the best thespian of the bunch). And the result was nothing short of spectacular.

This was not lost on Derek Elstro, the 27-year-old Chicagoan and co-founder of Roundhouse Productions who is directing Predator: The Musical!, a stage performance that opens on July 15 at The New Rock Theater. There was never any doubt that if the Predator franchise was going to be converted into a musical, it was the original film that would be used as the source material and not anything that proceeded it. Of course, none of this answers the most pressing question about Predator: The Musical!: Why would anyone make a musical out of the Predator in the first place?

“A friend of mine had told me he had an idea for a Predator musical. He told me ‘I’m not a writer, but I think it’d be awesome,’” said Elstro. While this sounds like a comment someone might make after a fourth shot of Malort or a second helping of pot brownies, Elstro had the good sense to store this nugget of information, and then uncover it during the appropriate time. That time was when Elstro was working on Point Break Live!, a stage show where the immortal Point Break is reenacted and an audience member is plays the lead role of Johnny Utah. Elstro played one of the surfers cum bank robbers, Grommet, a fun gig but something that couldn’t go on forever. So as the Chicago production of Point Break Live! was coming to a close, Elstro wanted to come up with the next big thing that plays well in a small, intimate theater. He remembered the Predator musical idea, got the blessing from his friend to use the idea, and then recruited writers William Stobb, Dave Krump and Will Bulka, as well as some cast members from Point Break Live! to be a part of the production, like Cody Evans, who’ll being play Dutch (the main character who was played by Arnold Schwarzenegger in the movie). 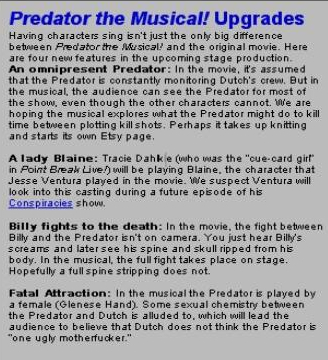 “Our Dutch is a personal trainer and I’m pretty sure he was born jacked. He’s like 5’5” and almost 200 pounds,” said Elstro of Evans.

While getting the cast in place, Elstro reacquainted himself with the movie to create the script, and he was quite pleased with the source material he had to work with. “I knew of the iconic lines. And after watching the movie all the way through, I realized how ridiculous the movie was and that it’d play well.”

Indeed the movie has plenty of bad, b-movie antics to parody, to say nothing of the fact that two often-mocked governors — Arnold Schwarzenegger and Jessie Ventura — are in the movie, along with a Sonny Landham, who played Billy and in real life was a wildly unsuccessful politician (his bid for a U.S. senate seat in Kentucky ended when he called for the genocide of all Arabs, and then used racial slurs to describe Arab people).  Still, Elstro isn’t bringing Predator to the stage just to tell some jokes about the actors. He’s directing a musical, and there will plenty of badass show tunes. Elstro said they currently have 10 songs for the production, including “I ain’t Got Time to Bleed,” performed by Tracie Dahlke (yes, this means a female will be playing Blaine and toting around ol’ painless).

Indeed, this is the Predator’s world, but it’s the muscle-bound idiots who make it an entertaining place to be. And if Predator: The Musical! songs are half as a good (or absurdly bad?) as the original movie’s dialogue, Elstro should be able to convince audiences to get to the theater and stick around. 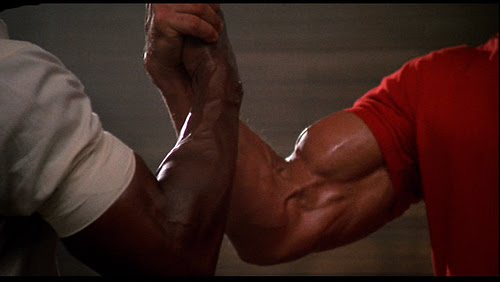 From the original movie: Ultra cheesy zoom on bulging biceps? Why not?