You’re Getting a Role Model: Men can Learn a Great Deal From Oprah 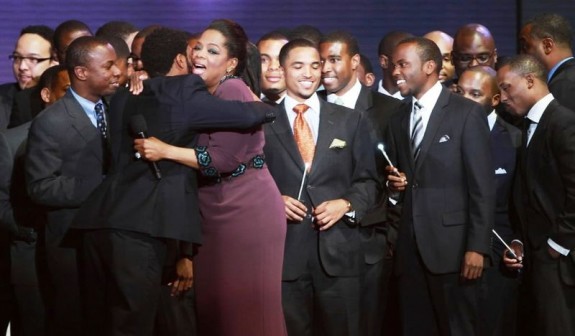 Oprah during the taping of one her final shows. Photo from the Chicago Tribune.

We’ve never paid a whole lot of attention to Oprah: not when we were younger and she was finding her voice, not when we were older and she could influence the presidential election and the NY Times bestseller list, and not last night when her celebrity-filled Chicago finales became a bigger story than Mayor Rahm’s second day on the job.

Still, as Oprah — who is 57 and has been arguably one of the most influential people in the world for at least the last decade — says goodbye to Chicago, we admire and applaud her walking away with dignity, and starting the next phase of her powerful career with aplomb. This might not seem like such an applause-worthy feat, until you compare her with some of her power-wielding male contemporaries.

As members of the male species, we wish there weren’t such readily available examples of powerful men behaving without a trace of dignity. Alas, it wasn’t such a great week for men with treasure chests full of money, power and perhaps some boner medicine. There is Dominique Strauss-Kahn, President of the International Monetary Fund, who is in police custody for charges of attempted rape and sexual assault. (Obviously, he’s innocent until proven guilty, but common sense says that most men who end up in these types of predicaments have acted, at the very least, in an undignified manner.) And there is outgoing California Governor Arnold Schwarzenegger, who starts the next phase of his life minus his longtime wife but plus a teenage “love child” that he can now openly bring to the weight room.

Oprah is certainly not perfect, and her show and media branches aren’t above criticism. And if you want to make the argument that rich and powerful men are wired a little differently than rich and powerful women, then by all means, go for it. But just because men with wealth and high standing are provided many opportunities for impropriety doesn’t mean they have to act on all of them. Or any of them. Especially when they’re way too old (and supposedly wise) to be acting like asshats. Maybe they don’t care about entering the prime or twilight of their lives with any sort of dignity or legacy intact. We just sort of think it’s worth considering.

There are plenty of rich and powerful men who wish they had the type of wealth, power and influence that Oprah has had for so many years. And we can’t imagine what many of them would have done with such a platform. Oprah did her best to use her bully pulpit for good, and behind closed doors she managed to not act like a complete schmuck. Sure, she has plenty of time to fuck up, but so far she’s managed to avoid the pitfalls that many powerful men have not. She’s one of the rare few that heed to the idea that “with great power comes great responsibility.”

So during this week when Oprah was being lauded for her achievements and two powerful men were busy tainting their reputation, we can say the following with assurance: Men who aspire to be rich, successful and influential would be wise to consider Ms. Winfrey a role model.