An Open Letter to the Chicago Food Scene

A creation from the Girl and the Goat.

Many condolences on your rough night at the James Beard Awards. We’re also extremely disappointed in the night’s events. Not about the lack of medals you took home, but about the way you behaved, or should we say, the way you didn’t behave. When talented Chicagoans get screwed during meaningless award ceremonies, they tend to lash out in the moment. Since Stephanie Izard’s Girl & the Goat didn’t win “Best New Restaurant,” Paul Kahan should’ve crashed the stage and had an “I’mma let you finish” moment in her defense. What’s the worst that could of happened? A slight backlash against Kahan that results in only 20 people waiting for a Big Star patio table instead of 40? 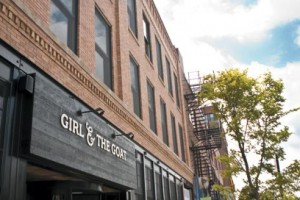 But seriously Chicago Food Scene, in 2011, you’re looking as awesome and promising as ever, and you don’t need a medal that looks like elementary-school-field-day award to prove it. As fellow Chicagoans, Man Up Chicago is proud of all you’ve accomplished. Still, we don’t want you getting complacent, so here are a few suggestions to keep you fresher than a piece of Sushi Wabi sashimi.

1. No more playing the respect card: There was a time when the only thing people associated with “Chicago food scene” was deep dish pizza, Italian Beef, a 1950’s-styles diner where the waiters were rude to customers and an upscale restaurant where the chef was rude to the waiters. Now Alan Richman subjects himself to the Schwa reservation system and also declares Great Lakes pizza the best in the country. John Mariani turned his prickly disposition towards Grant Achatz but also declared L20 the best new restaurant in America in 2008. Rick Bayless was named the best of the best on Top Chef Masters (which is on station that also airs Pregnant in Heels and Bethenny Ever After, but still). And the NY Times poked the beast by wondering if Charlie Trotter has been outpaced by other Chicago chefs who are more interested in being the next Bill Nye instead of the next Charlie Trotter. There’s even a Michelin rated restaurant in Logan Square and a slew of good Chicago food blogs. Ten years ago, the former seemed as likely as electing a black president by 2008, and the latter would have made as much sense to people as putting pop rocks on foie gras. The Chicago food scene is important enough to get national acclaim, and relevant enough to be nationally criticized. You want to know what disrespect really feels like? Move to Detroit. 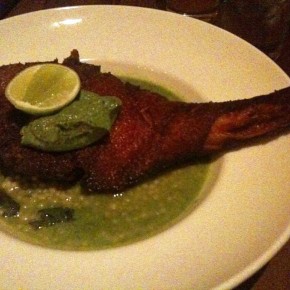 2. A moratorium on pork: Look, we get it. Every part of the pig can be made into a delicious entrée. But we can throw a pigs foot in any direction and it’ll land on a new restaurant that’s all about swine (for example, Porkchop, which is opening this week in the West Loop). If Mado could have figured out a way to stay open, there would currently be a restaurant that offers pig butchering demos (Mado), a pig butchering shop that serves sandwiches (Butcher and Larder), and a restaurant that serves a whole pig at your table (The Frontier) all within a mile of each other. As it stands, the place that serves a whole pig and the pig butchering shop are separated by about 100 yards. It’s not that we don’t like bacon flights, crispy pig’s tail, wild boar sloppy joes, or headcheese paired with microbrews. We just think the city has reached a pork saturation point. So try something new and different, like a hipster steakhouse. Yeah, we know it seems like an oxymoron, but so does “upscale, Gold Coast barbecue joint,” and that actually exists. 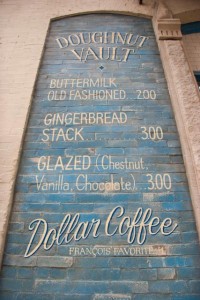 3. Don’t be afraid to ignore trends: A couple years ago it seemed like an extreme fucking tragedy that Chicago didn’t have food trucks. Everyone was clamoring for them. Now, after having them for nearly a year, we’ve realized the tamale guy and elotes carts are pretty much all we need when it comes to mobile-food operations. We don’t know how all those new food trucks are faring, but we have a feeling the same people who were tracking them down are now standing in line at the Doughnut Vault. And just like a few good food trucks spawned several others, we’re positive the Doughnut Vault’s success will give rise to similar shops that are as necessary as a third installment of Transformers. Perhaps all these derivatives of hot food trends will prosper, but we have our doubts. Consumers are fickle, trends die hard, and just because LA (doughnuts) and NYC (food trucks) have something bored food writers declare as the next big thing, doesn’t mean Chicago needs that same thing in spades. Jump on bandwagons in the shape of doughnut food trucks at your own peril. Chicago might be the “Second City,” but it doesn’t have to follow every major food trend that first popped up somewhere else.

In closing, we want to make it clear that we think Chicago is the best food city in U.S. The only reason we nitpick is because we care. And also because we needed something to do while waiting for our NEXT reservation to arrive in our Gmail. We want the Chicago Food Scene to dominate, but we reserve the right to complain, just like it reserves the right to mark up beer and wine by 200-percent. Now if you excuse us, we have a doughnut line to stand in. Thanks for listening.