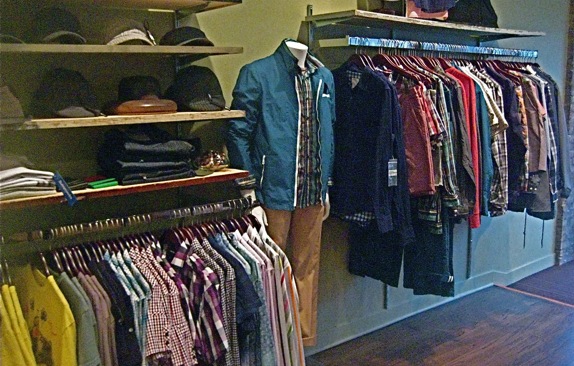 Editors note: We realize an online magazine for Chicago men might be expected to cover something as important the aldermanic runoffs. Instead, the day the city council gets its most recent makeover, we write about men’s fashion. Why? Well in this instance the men’s fashion is being sold at a new store that just opened. And in our opinion, new businesses opening in Chicago are just as important as new Aldermen (also important: boat shirts for spring!). And sometimes new businesses even validate your parking when your car ends up in a privately owned parking space. Which is more than we can say for our city council. Plus, everyone knows that best Aldermanic Runoff read is by Ben Javorsky at The Reader. No reason trying to compete with him.

If you haven’t heard of Hazel — a cute, meticulously curated jewelry and stationery store in Ravenswood — it’s quite understandable. The store is a bit lady-centric, and while it carries some guy-oriented stuff, it’s probably not enough to draw the attention of most men (unless you enjoy reading humorous greeting cards — hello Frantic Meerkat! — for hours and hours). Still, despite their limited options for men, we’ve always admired Hazel’s curators, who have a great eye for finding affordable and unique items from both U.S. designers as well independent artistes from across the Atlantic.

Luckily, Hazel has applied its keen sensibilities and good taste to a new boutique clothing shop —currently being referred to as Hazel Apparel — that features a tidy selection of men’s ware. The store’s vibe is like refined and slightly more adult version of Urban Outfitters. It features casual, cool clothes and skater-inspired apparel that doesn’t look too juvenile. Case in point: Hazel carries Life After Denim, an LA company that makes laid back, light-weight pants and properly cut comfort clothes. The label’s soft-as-Pau-Gasol boxing hoodie ($72) and breezy dockside cardigan ($98 – we think) could be wardrobe staples, unless your girlfriend steals them, which is very probable. Life After Denim’s chinos ($78) make for great weekend wear when you’re sick of your jeans (or when your jeans have become so riddled with crotch holes they’re unfit for public display).

Much like Hazel’s jewelry store, its apparel store carries European designers, like WeSC denim ($88) from Sweden and Supreme Being t-shirts (about $36) from the U.K. In the coming months, Hazel plans on adding attire from Nuco and ties from Nobis. And lest you think this is a guy’s only joint, there is an ample selection of clothes for the fairer sex. So bring your lady along. But no matter what she buys, she’s still going to try and fence your hoodie once you get home. Be vigilant, and wear it to bed if you have to. It’s sort of like well-fitting blanket anyway.