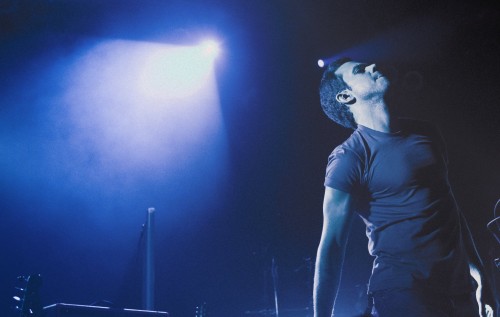 Anthony Gonzalez of M83. From the M83 Facebook page.

In this final part of our Favorite 15 Songs of 2011, we look at our five favorite songs of the past year. You can see songs 11 – 15 here, and songs 6 – 10 here. To listen to all the tracks, check out our Spotify playlist featuring every song.

We might be sick of it now, but there was a time in the spring when this song was as innocuous as it was catchy. We’d tell anyone who’d listen that “Pumped Up Kicks” was going to be their summer jam. We thought this song was destined for success — or least numerous car commercials — but it surpassed our expectations when it found its way on to mainstream radio and  VH1’s Top 20 Countdown. The song even reached enough ears for its lyrics to be dissected and dissed, although it’s not as if “Pumped Up Kicks” violent topic resulted in many people tuning it out. We figure we’ll be ready to listen to this song again sometime in the summer, and we’d take even odds that it will still be better than any indie-pop track released this coming year.

Conor Oberst of Bright Eyes heavy musical catalog is filled to the brim with weighty, soul-revealing lyrics. But its his comical, self-depreciating line about defeatism that made “Shell Games” an unexpected favorite for us this year. Lyrics aside, there’s a good-time feel to the song, which features a heavy helping of piano and synthesizer. We won’t take a guess as to what the song is truly about, but when Oberst gets to the bridge and matter-of-factly states “My private life is an inside joke / No one will explain it to me,” he delivers a line about the frustrations of finding love that is as good as anything in the Oberst lyric library, and as good as anything we’ve heard this year.

In “Helplessness Blues,” Fleet Foxes’ Robin Pecknold beautifully sings about finding his place in society, rejecting the idea of individualism in way that would make Ayn Rand disciples cringe. Just as some of the song’s lyrics discuss nobility in simplicity, the music echoes this sentiment. Most of “Helplessness Blues” is just singing over the sounds of an acoustic guitar, but with just those two elements, Fleet Foxes creates a sound as robust as its philosophical lyrics. By the conclusion of “Helplessness Blues,” Pecknold sings about working in an apple orchard, fulfilling a fantasy first laid out in the song’s opening verse of being “A functioning cog in some great machinery / Serving something beyond me.” It’s a nice sentiment, but we’re glad Pecknold is creating great songs about working in an orchard as opposed to only picking apples for a living.

It seems only natural for a group called Cults to have a song called “Abducted,” even if we’re pretty sure “Abducted” has more to do with being romantically obsessed than it does a good, old-fashioned cult abduction. Like most songs by Cults, “Abducted” clocks in at under three minutes. Lead singer Madeline Follin takes the first forty seconds of the song to wind up in low-fi, before throwing fastball after fastball of eerie desperation. “He tore me apart because I really loved him / He took my heart away and left me to bleed out, bleed out” she sings over a thick bass line, and a rapid drum and guitar beat that pulsates with Follin’s lovesick wails. The song is both exciting and spooky, and offers little resolution. So if the Cults decided to record a sequel, we wouldn’t complain.

M83’s Anthony Gonzales has spent his musical career making songs that capture the spirit of youth, and “Midnight City” feels like the culmination of his efforts; it’s a song as weird as it is exuberant; a song that explodes with city-life affirming excitement. The synth driven beat of “Midnight City” starts with what sounds like the call of a crow. But it only takes a few moments before the music morphs into a beat so epic, so ready-made for driving downtown at dusk, that Michael Mann is probably constructing a time machine just so he can steal “Midnight City” and use it in every episode of “Miami Vice.”  While Victoria’s Secret and “How to Make It in America” have already poached this song for their own devices, the real owners of it are people experiencing one of those “snuck into the city for the first time, stayed out until 4 a.m. and made out with a beautiful stranger” moments.