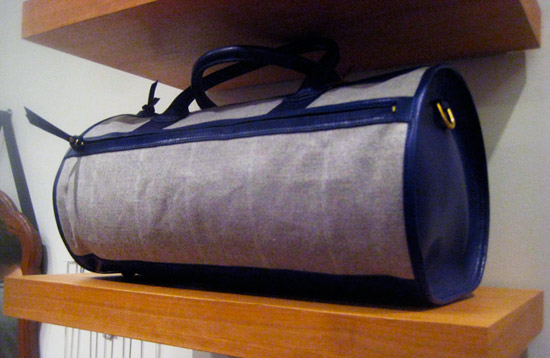 Adam, Matt and Peter Lafferty — three brothers who grew up in Okemos, Mich. — did not name their company Libero Ferrero to trick people into thinking their luxury luggage was made with fine Italian leather. Nothing could be further from the truth. Each bag proudly displays a “Made in the USA” tag to remove any doubt that theproducts were made with anything but American materials, and made by anyone but Americans.

The company makes products that combine Horween leather, Holland & Sherry wool lining and solid brass hardware. The brand name a combines the Italian word for liberty — Libero — and the last name of the brothers’ grandfather.During Libero Ferrero’s launch party at Bucktown’s  Apt. No. 9 clothing store, we caught up with Matt Lafferty, who lives in Chicago and is the oldest of the three brothers. Four Libero Ferrero bags were debuted at the event — the duffel, the Oak & Eddon suitcase, the Thompson physician-style bag and the Portage messenger bag. We asked Lafferty what his favorite Libero Ferrero bag is, and without hesitation he answered the duffel made from canvas and ink blue leather. It’s the only bag in the Libero Ferrero line that comes in that dapper shade of leather, but you can also get it in black cherry and hickory leather.

The vintage shape of the duffel ($895), combined with textural contrast of canvas and leather, makes it a favorite of ours as well. But the most practical bag from Libero Ferrero is the Portage ($1,495). It looks similar to a messenger bag and has a laptop pocket that can accommodate devices as big as 15½-inches. For a non-traditional take on a messenger bag, try the Thompson ($2,125), which looks similar to a bag used by doctor’s who made housecalls in the 1950s. Put a strap on it and it can easily be slung over a shoulder. The Thompson doesn’t have the same amount of room as the Portage, but it can still hold netbooks or tablet computers. 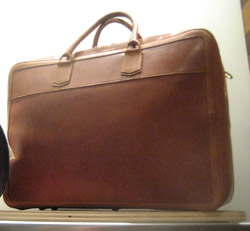 Ranging in price from $895 to $2,673, Libero Ferrero bags have costs you’d expect for small batch artisan leather goods. But if you can afford them, and you want them, we recommend getting them now. It might not be long before you see Libero Ferrero in major department stores, and the brother’s Lafferty profiled in fashion magazines. All of which will lead to new prices that’ll make the current ones seem like a bargain.