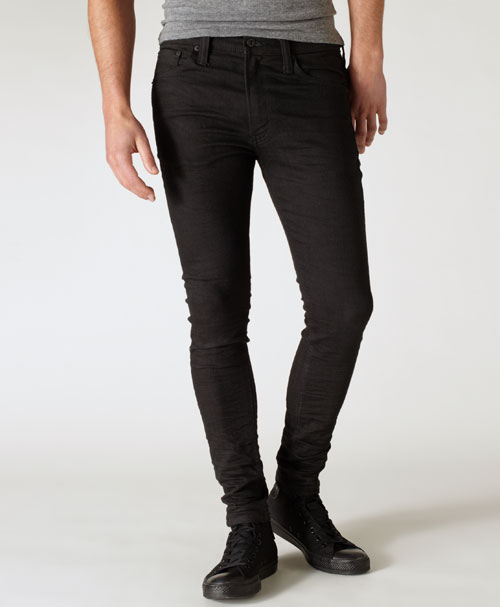 She had you by the balls. Now her jeans do too. Meet Levi's new Ex-Girlfriend Jeans.

I can think of one type of guy who might consider wearing Levi’s new Ex-Girlfriend Jeans:  A young man trying to convince people he’s actually had a girlfriend before. But even he should know better. And then he might consider doing a few squats so he will never be able to fit into jean Speedos again.

Look, I don’t care if Russell Brand and his ball-strangling britches are boinking Katy Perry. And I could care less what Milan says. Outside of athletic scenarios and Spiderman the musical auditions, men don’t need to wear skin-tight anythings, let alone jeans.

But I do care about Levi’s, an old-school brand that has a workwear collection. They make Trucker Jackets. And western shirts called “Sawtooth.” So why are they making jeans with a name most guys would be embarrassed to say? Granted, skinny jeans aren’t for most guys. And I’m not railing against slim and skinny pants.. Skinny is fine — I think Levi’s new Matchstick jeans look great. Super skinny worries me. Men’s jeggings and jeans, like the Ex-Girlfriend variety, which Levi’s says has “a fit that’s super-snug allover… as skinny as it gets,” makes me worry about men’s reproductive organs.

I realize lots of manufacturers make ultra skinny jeans for men. But at least they don’t call them “Ex-Girlfriend Jeans.” I can’t think of any guy who would be proud to fit into his current or ex-girlfriends clothes. I can’t think of any guy who would want to wear something with a name that implies, “These jeans were made for someone without a penis. And that last sentence was not meant in the metaphorical, emasculating sense, but literally, these jeans were designed for someone without male genitalia.”

Perhaps this seems like a double standard, since “boyfriend” jeans, shirts and jackets are made by many women’s clothing companies. Yet “boyfriend” clothes are meant to be a little big and comfortable, which I understand appeals to women who get sick of wearing really tight jeans, shirts and jackets. However, I don’t think any guy would say, “I’m tired of wearing comfortable clothes this week. Maybe I should put on some ‘girlfriend’ pants that sinch my nuts.”

And if I’m totally wrong about all this, and Levi’s Ex-Girlfriend jeans become all the rage, well, I’ll still be the guy at the bar not wearing cucumber smugglers. After all, someone has to make the future ex-girlfriends of the world, as well as the boys who wear their jeans.