Kerli At Lollapalooza: A Preview of the Pride of Estonia

When going with her more natural look, Kerli is quite easy on the eyes. Not exactly the best reason to see her at Lollapalooza, but a reason nonetheless. 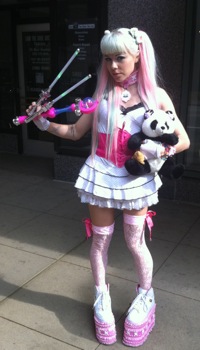 Kerli that most people see these days: a caricature of a Japanese school girl.

3 Reasons to see her

Hear what “Bubble Goth” sounds like: Kerli calls her style and music “bubble goth” (actually, a music critic called it that and Kerli just went with it), and seeing how this style translates to stage show could be intriguing. For a sample of Kerli’s visual cues, check out her videos. They range range from nightmarishly odd (talking dolls ) in “Walking on Air” to fantasy-world odd (riding unicorns and riding a swing in a magical forest ) in “Army of Love”. Those are also her two most notable songs. On “Walking on Air,” the sound of her voice fluctuates between Nelly Furtatdo’s and Bjork’s while the beat seems to combine wind-up doll noises and heavy synth. Her new track “Army of Love” relies a little too much on the autone, but it’s extremely danceable.She’s an Estonian pop star: Seeing Kerli provides some insight into what a girl born-and-raised in Estonia but bred on American pop music turns into. Even if the show is awful, it could still inspire a rather fascinating thesis paper.

She could be the next Lady Gaga: The Kerli and Lady Gaga comparisons exist because they are obvious (so obvious even Kerli has ranted about Gaga copying her); they are both blond-haired (well, sometimes) women in their 20’s who dress in an avant-garde way and sing pop music. Truthfully, the two seem pretty different. Visually, Gaga dresses like a fashion-school experiment and Kerli like a barbie doll with a Japanese-teenager stylist. Sonically, Gaga’s songs consistently crest with big pop beats, while Kerli hasn’t quite mastered that ability. But we will play along with the Kerli and Gaga comparison in this respect: in 2007, an unheard of Lady Gaga played an afternoon gig at the BMI Stage at Lolla, and three years later she was a headliner at the show. This year, Kerli makes her first performance at Lolla during an afternoon gig at the BMI stage, and with a heavy hand of fuzzy logic, you might say Kerli is following in Gaga’s footsteps and will be a Lollapalooza headliner come 2014. We’d bet everything against that from actually happening, but who knows, this could be your chance to see Kerli before she becomes an international star with a 10-digit Twitter following. 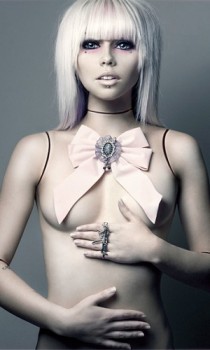 Fantastically creepy and artistic. Kerli as a mannequin. Gaga must be fuming she did not come up with this.

And 3 reasons not to see Kerli:
She has some really bad songs that make us wonder who the real Kerli is. On one hand she seems positively weird, which we like. But then you hear a song like “Beautiful Day,” which has no business being on an album called Love is Dead. It seems like some record studio slosh that was forced on her, so maybe it can be forgiven. But even more awful is her Alice in Wonderland inspired track “Tea Party,” where her lyrics are laced with laughably bad sexual innuendos (for instance: “I got the goodies baked / Got more than you can take / Just try and nibble on my biscuits and my rainbow cake”). This is one of those songs where Kerli seems to be doing a foreigners impression of a U.S. pop singer instead of just being herself. And it’s cover-your-ears bad.

A diminished stage show: Festival performances typically mean condensed acts, which can be good, but condensed theatrics is usually bad pop stars. Their stage acts need to be visually strong. There are clips on the Internet of Kerli performing live, and many of them lead you to believe that she’s a performer who prefers a stage show with an array of visual interest. The BMI stage in the middle of the day might not bode well for any theatrics, especially since she slated for to play for only 45 minutes.

Lady Gaga’s Lolla performance in 2007 wasn’t all that great. So if Kerli is following in her footsteps, well, this performance should be underwhelming.

Who we recommend seeing at 3 pm on Friday during Lollapalooza: Foster the People. Kerli’s interesting, and under different circumstances we’d check her out. But Foster the People, and the band’s infectious indie pop, are tailor-made for afternoon slots during music festivals. Singing along to “Pumped Up Kicks” under the sun might be one of your favorite memories from Lollapalooza. We’re not as confident about any moments from Kerli’s act.