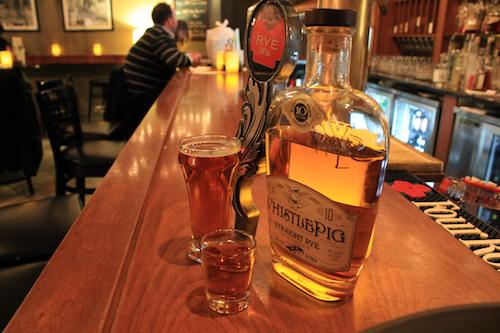 Shot of whiskey with a beer back at Jerry's Sandwiches in Wicker Park.

Editor’s Note: We like beer, booze and certain Chicago bars. We also have a thing for the timeless, manly combination of a shot of whiskey with a beer back (okay, to be honest, any shot of alcohol will do). So we decided to go to Chicago bars we dig, and ask the barkeep a simple question: A guy sits down and says “give me a beer and a shot.” What do you serve him? The result is our new Beer and a Shot section.

Jerry’s Sandwiches in Wicker Park is a Decidophobics nightmare (and no, Decidophobia is not something we just made up). For the rest us, it’s a cornucopia of options. A sandwich libertarian’s dream, perhaps. Because the menu has like — and this is an estimate — at least 100 sandwiches on it. But if you can’t find something you like, you can just build your own. And no matter what you order, there’s a 98% chance your meal will be really fucking good. 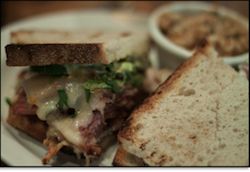 One of Jerry's many sandwiches: the Cuban.

But we are not here to talk about sandwiches. We are here to talk about beer and booze. According to Trey Elder, manager of Jerry’s in Wicker Park, the restaurant usually has between 170 and 200 beers on the menu and 80 whiskey’s behind the bar. So when we asked Jerry’s bartender Sean Kraus to come up with a beer and a shot combo for us, we did not envy the decision he would have to make and the catalog of hops and rye he’d have to mull over. Of course, Kraus is a professional, so his answer came pretty quickly:

One more time: The beer is Emmett's Rye IPA, the whiskey is Whistle Pig Rye.

Manager Trey Elder adds: “Some people want a beer to wash the heat away and cancel the shot. I like things that compliment each other and let the whiskey run it’s course, like this pairing does. I don’t like it when the beer cancels the whiskey.”

We tend to side with Elder’s take on the beer and the shot. A complimentary combo make us feel good about our order. Although from time to time, we get a shot that’s the liquid version of seeing the Chappelle’s Show old-people-covered-mayonnaise sex scene, and it needs to be erased from our palate and our memory immediately. That’s when our beer to act as a fire extinguisher. Luckily, a shot of Whistle Pig does not need any dousing.

So next time you’re at Jerry’s try the Emmett’s Rye IPA, $7 for a 12oz., and a shot of Whistle Pig, $10. And if you’re looking for more wallet-friendly shot of rye, Elder and Kraus recommend substituting Old Overholt rye, which is not bad at all, and is always $3. 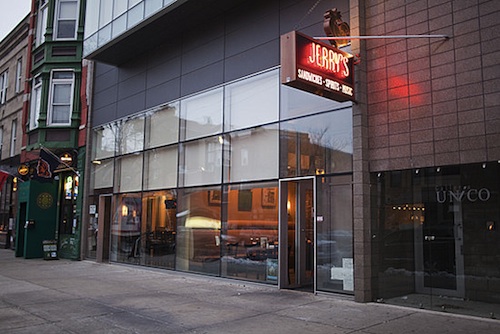 The outside of Jerry's in Wicker Park, located on a fine stretch of Division.