There Will Be Handclaps: GroupLove at Lollapalooza 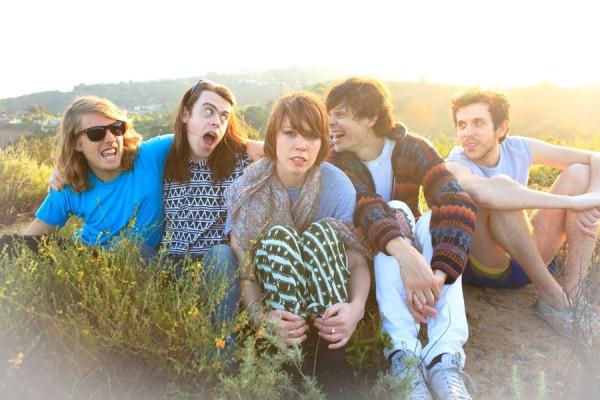 Artist: GroupLove.
When They are Playing: Noon on Saturday, Aug. 6 at the Sony stage. They’re also opening for Two Door Cinema at 10 pm at Lincoln Hall on Saturday. It’s an official Lollapalooza aftershow, and it’s currently sold out. But we’re sure somebody is giving away tickets.

Why You Should See Them
They are a band on the rise: They’ve appeared in an NME Radar article. They’ve opened for Florence and the Machine (after Florence had made it big). Carson Daly says they are awesome live. Okay, so maybe that last one doesn’t carry the kind of weight it would have 13 years ago. But if you listen to GroupLove’s eponymous EP (you can stream the tracks on their website), you’ll have a hard time not getting sucked in by their happy-go-lucky tracks full of handclaps on songs like “Naked Kids” and “Don’t Say Oh Well.” There is also the handclaptastic “Itchin’ on a Photograph (video at the bottom of the page),” which is not on the EP. “Colours” (pardon the “u” — the majority of the band is from either NYC or Cali), is their current single, which gets spins on Sirius Radio’s XMU channel. In “Colours,” vocalist Christian Zucconi’s sings in a cadence that has reminded some of Modest Mouse or the Pixies (others might find this comparison ridiculous, or in the words of a commenter on Buzzbands.la “Comparing Grouplove to Modest Mouse is like comparing Obama to Hitler.”)

GroupLove formed over the last two years, and before that no one in the group had known each other. They meshed quickly, and while they are still pretty green when it comes to making music together, they might just be too spunky to fail. Even if their lyrics aren’t always as happy as their melodies, they make some excellent sing-along beach music. They also have a full length album coming out in September called “Never Trust a Happy Song.” Clearly they are self-aware enough to succeed, even if their music has blissfully naive quality. It should prove to be a winning combination. And you can see them before the majority of people even get to Grant Park.

Why You Might Not Want to See Them
All that damn clapping: Not into smacking your hands together to the beat of song? Then stay far away from the Sony stage at noon on Saturday during Lollapalooza. You’ll probably be asked to clap more than the Democrats during the President’s next State of the Union Address.

GroupLove is a band that will seem phony to some people, because happy bands, just like overly happy people, can be annoying and disingenuous. There is a car-commercial-in-waiting vibe to some of their songs, and we know how unpleasantly that can rub some music fans. To go one step further, their song “Naked People” doesn’t just seem destined for a car commercial (despite its marijuana references), the lyrics read like they were written after the group watched a bunch of car commercials about driving to the beach. Maybe the GroupLove members really do lead such a pop-song existence. Or maybe their songs are a bit too detached from reality to resonate with anyone older than 17.

GroupLove vs. Sleeping In: We usually devote this section to recommending other bands that are playing at the same time as the band we just previewed. But honestly, we don’t know much about other bands playing Lollapalooza Saturday at noon (no offense to the Kiddie-Palooza stage). So the real question is whether it’s worth dragging your ass to Grant Park by noon to see GroupLove. We say yes, because we’re pretty sure GroupLove will command a much bigger crowd and much better Lollapalooza timeslot next time they come around. See them now before their music is in  Kia commercial running 100 times a day.