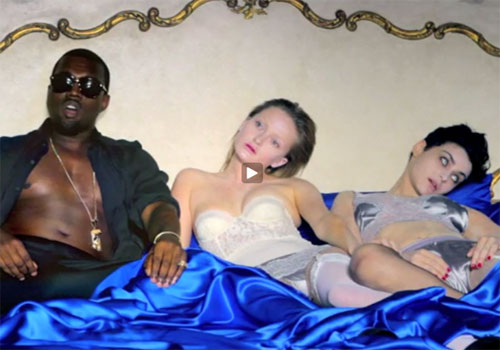 If the first full weekend of sun and festivals didn’t quite satiate your taste for throngs of people and live music, then count your lucky Chicago flag stars that you live in a city with so many weekday opportunities for more music and more standing shoulder-to-shoulder with strangers. Today there are two concerts we recommended attending, each with musicals acts who specialize in playing acoustic instruments.

Concert one comes in the form of Iron & Wine, a man whose look and sound came about five years too early during the last decade. Iron & Wine is one-man-band made up of singer and songerwriter Samuel Beam. His big unkempt beard plus his secluded-in-a-log-cabin aesthetic and sound started getting noticed around 2002, way before hipsters were ready to embrace facial hair and super-subdued folk music. By the end of last decade, Bon Iver and Fleet Foxes were the pinnacle of critical acclaim and beard envy. Iron & Wine is the man who got the ball rolling. He’s the patron saint of the urban beard and he’s playing for free at Pritzker Pavilion in Millennium Park as part of the “New Music Mondays” series. Get there a little early, expect a pretty decent-size crowd and plenty of beards. The concert begins at 6:30.

Concert two is the Dodos, who are performing at the Metro at 9 pm (doors at 8). No beards here (not that we know of), in fact baby-faced Dodos lead singer Meric Long looks like he’s still a good five years away from needing to shave more than once a week. The Dodos don’t exactly rock out, but they play with a little more recklessness and excitedness than you’d expect out of a couple San Francisco guys who aren’t fond of electric instruments nor even bass drums. While you could probably bring a sleeping baby to Iron & Wine and not worry about the little one waking up, the Dodos will certainly wake the baby, and perhaps inspire him to learn to walk and jump and down. For the record, The Metro isn’t allowing babies nor anyone under the age 18 to see this show. Good seats still available in this venue that features no seats and concert-goers with little interest in sitting. Tickets are $18. Listen to their song “Black Night” below:

Finally, if you’re not interested in going out, you can watch the uncut version of Chicagoan Kanye West’s new video for “Monster.” It features Kanye, his rapper friends and lots of dead white women. Apparently some people are a bit pissed about the whole thing, which resulted in a disclaimer before the video that says, “The following content is in no way to be interpreted as misogynistic or negative towards any groups of people. It is an art piece and it shall be taken as such.” It should also say, “If you need a disclaimer to tell you that, you lose the right to consume any popular form of entertainment.” We realize the “Monster” video is a bit unsettling, but it’s also so overtly artistic that if it ended up in art exhibit it’d get laughed at for trying too hard. Whatever the case is, watch the “Monster” video at KanyeWest.com. Probably not at work though, unless you work at a morgue, and if that’s the case, feel free to criticize this video for it’s unrealistic portrayal of way-too-good-looking dead people.