Fin Sushi in Ravenswood: A Battle for the Corner of Wilson & Hermitage 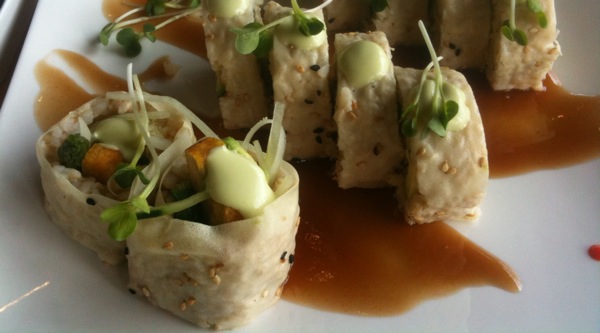 [slideshow]
As once documented by Seinfeld (and probably countless others), every big-city neighborhood has a plot of commercial space that can’t sustain a long-term business. For Ravenswood, that space is on the corner of Wilson and Hermitage. Recently, a new restaurant moved in. Is it up for the challenge? Let’s find out. Here’s the tale of the tape.

The Challenger: Fin Sushi Bar aka The Bento Box Behemoth
Imposing but minimal, Fin arms itself with George Nelson Bubble Lamps and slings specialty rolls bigger than the circumference of an open mouth. Its irregular style is highlighted by the vegan Sesame Brown Rice roll, wrapped in a sesame soybean sheet and filled with enough fruits and veggies — spinach, cucumbers, plantains and asparagus — to make a community garden jealous. Before hitting taste buds with the Sesame rolls, Fin sets up palates with the bacon wanton appetizers that are stuffed with cream cheese and celery.

The Champion: 1742 Wilson, aka The Spit-You-Out Storefront
Relentless and profit-blocking, this revolving storefront squashes small businesses with the force of a thousand unpaid low-interest start-up loans. It’s most recent victim was the Peppermill, an ill-advised Italian restaurant that lasted about 12 months. Before that, the storefront was vacant for a few years, taunting would-be contenders with a “For Rent — Perfect Space for Cafe or Small Office!” sign. Don’t believe the signs’ niceties and enthusiasm. This space is ruthless killer.

The Verdict
After three rounds (or months), Fin sushi has been fighting the good fight. Every neighborhood needs a few pan-Asian restaurants, and Fin fills the void nicely. Is it enough to stay in business in a spot that few restaurants would dare show their face? Maybe. Is Fin good enough to trek to Ravenswood to try it out? Hell no. Chances are the neighborhood you live in has a few mid-priced sushi restaurants that are exactly the same. But if you’re in the neighborhood, you should swing in. Just don’t be surprised if it’s gone in a few months. This revolving store front might be pacing itself to deliver the death blow sometime in the fall. Never underestimate the heart of a champion.