Beer and a (Polarizing) Shot at Hearty Restaurant

A shot of Fernet-Branca and beer back, at Hearty restaurant in Boystown.

Editor’s Note: We like beer, booze and certain Chicago bars. We also have a thing for the timeless, manly combination of a shot of whiskey with a beer back (okay, to be honest, any shot of alcohol will do). So we decided to go to Chicago bars we dig, and ask the barkeep a simple question: A guy sits down and says “give me a beer and a shot.” What do you serve him? The result is our new Beer and a Shot section.

“Fernet-Branca is the shot mixologist’s drink when they’re off the clock,” says Carol Donovan, the mixologist at Hearty restaurant in Boystown. Hearty is known for it’s modern take on comfort food. Fernet-Branca is known for making people plain uncomfortable. At least the newly initiated. The bitter taste is overpowering and intense. It’s an 80-proof amaro digestif from Italy with bigger balls than Ricky Gervais at the Golden Globes (circa 2010). Fernet-Branca is in the same family as Jägermeister, but it’s flavor more complex. It’s made from a mixture of 40 herbs and spices, like peppermint oil and aloe. Although you might decide the only ingredient is gasoline. 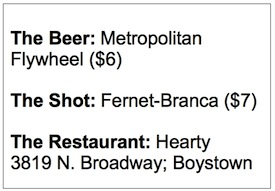 You know how some foodies rave about things like tripe, or veal heart, or blood pudding? Or many other dishes that the average person wouldn’t touch with Bea Arthur’s fork? That’s what Fernet-Branca is in the serious drinker community. It tastes like medicine. It’s been used as medicine. But those in the industry (cocktail industry, not medicine) love it’s bodacious bitterness. And alleged healing qualities.“It has somewhat of a stomach settling effect,” says Donovan. “It’s an excellent shot, especially if people are drinking a lot.” We agree. It’ll either relax your stomach or make you stop drinking entirely, possibly both, depending on your disposition to bitter shots.

Whether you love it or deplore it, you will want to chase it. Donovan’s chaser of choice is the Flywheel lager from Chicago-based Metropolitan Brewery. “[Flywheel is] a light lager, but it’s not wimpy,” says Donovan. “It acts like having a scoop of sorbet between courses. It’s that type of a palate cleanser.” 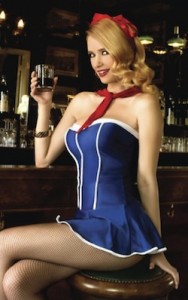 But it’s not a palate eraser. The smooth Flywheel will help your taste buds dance themselves clean, but not completely clean. The bitterness of the Fernet will linger a little while, like a great dream. Or perhaps a nightmare.

In case it’s not abundantly clear, this beer and a shot combo is not for everyone. The Flywheel is something all Chicago beer drinkers should have in their fridge, because it’s versatile enough to pair with most food, and it’s a serious upgrade over macro-produced lagers.

But Fernet-Branca? Well, even Infinium Spirits, who distributes it in the U.S., says on its website that Fernet-Branca “is not for the easily intimidated.” Now, we sort of dig Fernet-Branca; it’s intense and memorable. It reminds us of our first time watching Requiem for a Dream. It’s going to make you say “son of bitch!” once you shoot it. Whether you’ll say it with a positive or negative inflection is difficult to determine. But it’s worth finding out.