A former Chicagoan starts Duke Cannon, a company that sells the biggest bar of soap money can buy. 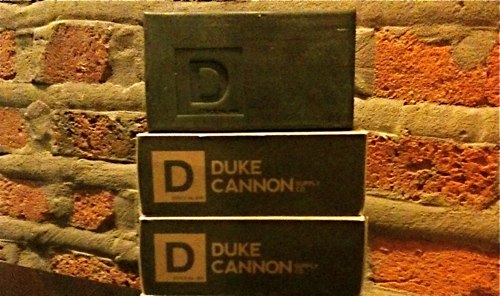 Duke Cannon’s “big ass brick of soap” is sure to appeal to people who can easily palm a basketball. At three times the size of a typical bar of soap, it’s easy for those with massive mitts to grip. For those of us with normal-sized back slappers, it might be a bit unwieldy at first, but like most soap, it’s guaranteed to shrink in size after a few uses. Also, like a brick of Velveeta cheese, it can be be cut into more manageable sizes (and probably tastes better than Velveeta too). 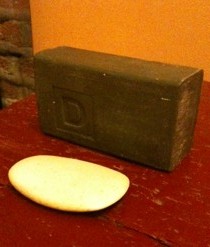 Sam Swartz, a former Chicago resident with average-size paws but above-average entrepreneurial and marketing acumen, is a co-founder of Duke Cannon. He helped implement the soap’s signature style, the aforementioned “big ass brick” shape, which was inspired by the appearance of GI issued bars during the Korean War. Hence the soap’s Army green color.

A portion of all Duke Cannon sales go to military charities, and the soap is made in America. Also, the more soap you buy, the more things you can redeem your purchases for. Duke Cannon has a rewards program, and reward items include 1985 Topps baseball cards (seriously), an extension cord and a kettle grill from Weber. If it isn’t already apparent, the Duke Cannon brand is about old-fashion male toughness. We don’t really recommend buying hygiene products based on branding strategies, but we do appreciate marketing honesty, like the area on the Duke Cannon soap box that says the product “won’t help you get laid.” Still, what we appreciate most is that it’s a big block of soap for your buck, it smells good, and at three-quarters of a pound, it’s a great weapon to throw at bathroom intruders. 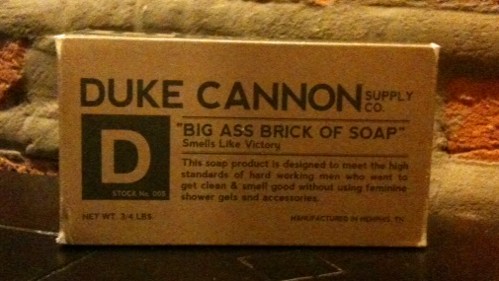 A Duke Cannon soap box. Large, but not big enough to stand on like a metaphorical soap box.