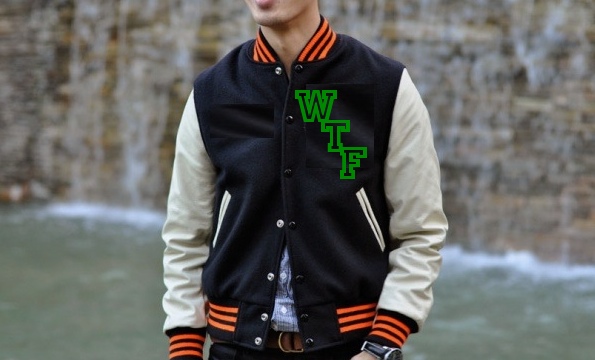 "I used to be carried in the arms of cheerleaders." But now you're an adult. Try to dress like one. Leave the varsity jackets for teenagers who actually appreciate them, and earned them.

The fashion world has found design inspiration in the uniforms of workers, military personnel, and sportsmen, and for the most part, we’re all better off for it. Fashion rarely belongs to a certain group of people — okay, limited edition Air Jordan’s typically only belong to sneaker fanboys — and designers have a way of making apparel egalitarian so anyone can take ownership of a particular style. In the last few years we’ve learned that workwear like chambray shirts are suitable for tilling the fields or performing at the VMA’s; boat shoes can be stylish on people more likely to have an ironic tattoo of a boat than an actual boat; and you don’t need a need to attend an Ivy-League school, or hell, even have college diploma to dress WASP-ier than a Winkelvoss. 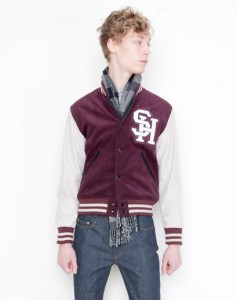 This model looks like he should be in high school. How many non varsity-athlete teenagers would want to sport a varsity jacket?

Unfortunately, the fashion world doesn’t understand that every piece of attire needs the runway treatment. We’re reminded this every time designers decide camouflage is cool for civilian apparel. (It isn’t. You want to look cool in camo, join the Army. You want to look like someone with too much disposable income and too little fashion sense? Buy this $450 camouflage sports jacket and matching $195 camouflage button down.) Still, many classic pieces of men’s apparel can be traced to military design, so we sort of understand why designers can’t help themselves when it comes to creating camo couture.

Lately Fashion forward designers have tried thinking outside of the box by exhuming a coat people put in boxes after they graduate high school. This is resulted in a trend that confuses us: the adult varsity jacket.

Specifically, we’re talking about designer lettermen jackets, which are highly stylized versions of the ones high school jocks wear. While the high school versions contain a school letter (or letters) earned for playing varsity sports, the ones being pedaled by labels like Shipley & Halmos and Brooklyn Circus feature letters that represent the brand. For instance, the Shipley & Halmos jacket have a large “SH” over the left breast of the jacket.

Varsity jackets worn by athletes display an allegiance to their team and school; designer varsity jackets worn by adults display an allegiance to a brand, which would seem reasonable for adults who have a vested interest in the brand, or adults who are budding race car drivers looking to land a sponsorship. Alas, most adults do not fall into those categories, and most adults wouldn’t spend hundreds or thousands or dollars on a jacket that makes them look like they play for team True Religion, or team Rag and Bone. 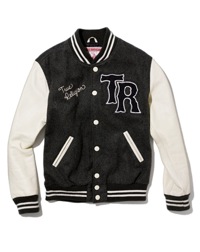 This designer varsity jacket costs over a thousand dollars. A small price to pay to let everyone know you play for team True Religion.

Still, if people want to look like a shill for a clothing manufacturer, we suppose that’s their business. Our bigger problem with the adult varsity jacket is more a philosophical one. Unlike many articles of clothing that look cool for superficial reasons, any coolness varsity jackets have come from what they represent. The varsity jacket is cool because the captain of the football team wears one, and not the other way around. The teenagers who desire the jacket don’t do so because they think the mix of leather sleeves, a wool body and banded collar is chic, they desire it because it’s a vehicle to display their athletic achievements. The varsity jacket is special because not everyone gets to wear one.

Now we aren’t trying to say a varsity jacket is the greatest and most important item a teenager could ever own. But it’s clearly important for some high schoolers, and there’s nothing wrong with that. Here’s something that seems very wrong though. It’s a quote from a GQ.com slideshow about varsity jackets.

“The romance of the letter jacket and being the team captain or the guy who lettered and had a sport—that’s a cool factor now.”

The thing is, varsity jackets have always been “a cool factor” for certain teenagers. It hasn’t stopped being one, and it probably won’t in the foreseeable future. But now its a cool factor for people in the fashion world? We wonder, is it really cool for men to romanticize something they probably never were: a teenage, lady-killing football captain? Romanticizing the concept of youth is one thing. But if you’re an adult who still wishes to capture the essence of being a 17-year-0ld All-American jock, you don’t need an updated varsity jacket, you need to schedule a few extra sessions with your therapist.

Let’s think of this romantic notion in another way: If in you 20’s or 30’s (or even older) you saw the guy from your high school who actually was the lady-killing football captain, and he was wearing a varsity jacket to recapture his teenage cool, you’d probably think he was pathetic. Any indication that someone is trying to relive teenage glory years is typically met with judgemental groans, whether that someone is providing a play-by-play of a touchdown drive that happened in the early ‘90s, or yapping about a near perfect SAT score from 17 years ago.

Regardless of what we write, the adult varsity jacket is going to continue to pop up on runways, fashion blogs and clothing stores. And with school starting, regular varsity jackets are going to start appearing on a whole new crop of teenagers lettering in sports for the first time. Both jackets are destined to be put in boxes and never worn again. We’ll let you guess which one we think will end up packed away in three years, and which one will be packed away in three months.