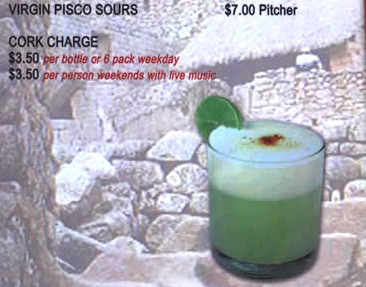 Hidden on a menu page you probably could care less about, is the best kept secret on Taste of Peru's menu: The ripe for spiking "virgin Pisco sours."

Pisco is a South American brandy, and certainly not something you’d think to bring to a BYO establishment. Partly because it’s a south-of-the-equator spirit that most people haven’t heard of, and partly it’s not beer nor wine. Unless you want slam shots or drink something on the rocks, there’s little upside in bringing a bottle of liquor to a BYO, because you sure as hell aren’t making a proper cocktail there. Which makes wine and beer the beverages du jour for almost any trip to a Chicago BYO. Except when that BYO is Taste of Peru.

On Taste of Peru’s menu, which is full of tantalizing images of Peruvian food, it’s easy to overlook the beverages and desserts page. Yet on this page is the secret that makes Taste of Peru Chicago’s top BYO. There’s item entitled “virgin pisco sours.” It’s $7 for a pitcher. And if you bring your own bottle of Pisco, Taste of Peru will happily deflower your drink.

Pisco sours are to Peru what Mojitos are to Cuba, but without all the fanfare in the U.S. It’s not on the menu of most Chicago bars and restaurants, except those few cocktail joints that are serious about mixology. For instance, The Bristol in Bucktown makes a great Pisco sour. It’s also $11. At Taste of Peru, a pitcher of Pisco Sour equals about four drinks, and it costs $7 for the mix and whatever you paid for the Pisco (you should be able to snag a decent bottle for $15 to $20). And don’t think Taste of Peru is just combining store-bought sour mix with Pisco — it makes their own concoction, replete the all-important egg white for frothiness.

We won’t claim this is the best Pisco Sour you can find in Chicago. But it’s the best BYO experience you can find, not to mention, you’ll be embraced by the Taste of Peru staff when you plunk down a fifth of Pisco on the table. During one our trips there, the restaurant’s owner Caesar Izquierdo came to our table and Bogarted a glass of our Pisco sour. It’s hard to get too mad when the establishment’s owner does this, especially when he comps the next pitcher and hangs out at your table for an hour. Yeah, they are pretty friendly at Taste of Peru, especially when Pisco is involved. 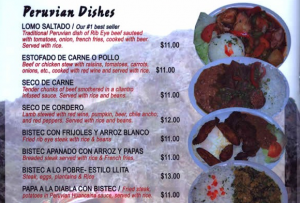 An image of Taste of Peru's menu. Let's go some place where the menus have pictures of food!

All this Pisco sour talk might make you think the food is secondary. It is certainly not, as Taste of Peru received a Bib Gourmand rating from the Michelin Guide, has been touted by local mags like Chicago and Time Out, and appeared on episodes of Check Please and Diners, Drive-ins and Dives (okay, we know those shows might not be the crown of culinary excellence, but there aren’t many other BYO’s with that type of resume). Adding to the restaurant’s charm is that it’s in a dumpy strip mall in Rogers Park, its website design looks straight out of the mid 1990s (and bizarrely, has Google ads on it), and its menu design is straight out of 1980s (did we mention there are pictures of food on the menu?!).

But maybe you don’t care about the aesthetic “charm.” And that’s fine. Just go for the Pisco sours. They’re charming enough.