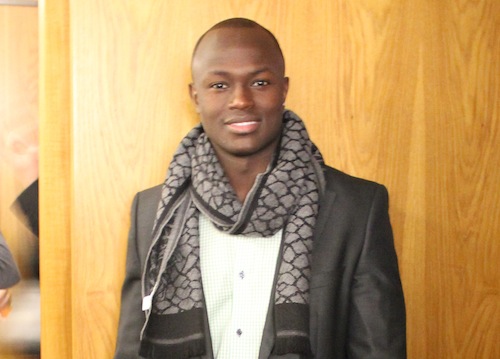 Our four fashion forward men at the Watch312.com launch party. Read on to see their outfits from the neck down.

In a past life, we enjoyed being men about town and attending any event our editors would allow us to. These days, well, we need a little extra motivation to hit the launch party/soft opening/anniversary party circuit instead of staying home and watching the NBA on TNT. But a new Chicago website, Watch312.com (a site featuring various webisodes about all things entertainment in Chicago), was having a launch party at the James Hotel last night, and for a variety of reasons, our interest was piqued. One of those reasons is that we dig the James Hotel. Another reason is that a featured voice on Watch312.com is always entertaining Amanda Puck (aka The Foodarazzi; aka the woman who hosted Check Please! when Barack Obama was on the panel). Most importantly, we figured there’d be plenty of stylish guys at the event we might learn a little something from. We were right. Below are four well dressed gentleman who know how to put an outfit together for a Thursday night event.

Name: Alhadji Camara
Trade: Supervisor at JBar.
Why We Dig his Look: That scarf — it really ties the outfit together.
His Favorite Part of the Outfit: The Versace scarf (obviously).
Favorite Item He Didn’t Wear: A new pair leather, winter-grade brown boots from Aldo.
Favorite Movie of the Past Year: Moneyball.

Name: Lance Kollman
Trade: Best Dressed Server on Rush St. (Rosebud to be exact).
Why We Dig his Look: The chunky cardigan and knit scarf — it’s fireside chic. But the slim tie bar makes it a true stepping-out wardrobe.
His Favorite Part of the Outfit: The slight contrast between the black chinos and the caramel-clored wingtips and belt.  It’s a post-graduate style move — he pulls it off with aplomb (our words, not his).
Favorite Item He Didn’t Wear: Wallace and Barnes plaid shirt from J Crew.
Favorite Spot to Grab a Drink: Wangs on Broadway. 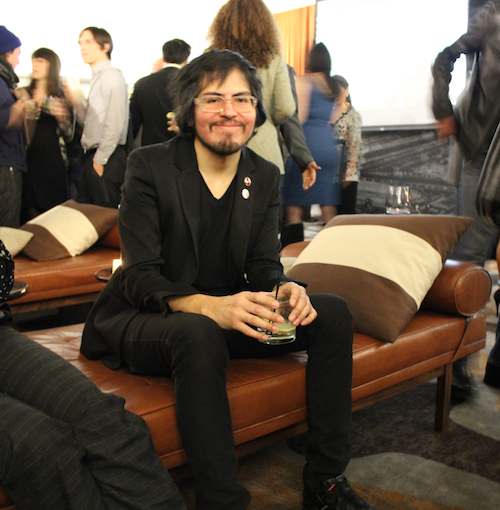 Name: Anthony Ramirez
Trade: Retail by day, fiction writer by night.
Why We Dig his Look: Minimal. Simple. The slightly rolled up jacket sleeves. The lucite frames are pretty rad too.
His Favorite Part of the Outfit: The indie rock buttons on his lapel. The red one says Interpol. The white one is a Zola Jesus button. We think Zola Jesus makes everything better too.
Favorite Movie of the Past Year: Warrior.
Favorite Spot to Grab a Drink: Neo in Lincoln Park.

Name: Josh Shores
Trade: Colorist at Maxine Salon.
Why We Dig his Look: The dress shirt buttoned all the way up. It takes a brave man. He makes it work without looking stuffy nor awkward.
His Favorite Part of the Outfit: The shear sweater he bought during a recent trip to London.
Favorite Item He Didn’t Wear: One of his many deconstructed tank tops. He gets his from Ragstock in Wicker Park and the Levi’s store.
Favorite Movie of the Past Year: The Debt.