What Carlos Boozer Added to his Game During the Lockout

Carlos Boozer tells Marc Gasol to look up and acknowledge his new hairline.

Carlos Boozer is probably the most maligned player on the Chicago Bulls. His performance so far this season suggests his game is regressing. But his hairline no longer is.

The official haircut of Man Up Chicago is bald, but just because we’ve embraced the style, doesn’t mean everyone else has to. Including Mr. Boozer. We have to admit, he has a mighty fine hairline these days, and even though he plays for a team with a legendary player that made bald awesome, perhaps sharing the frontline with Joakim Noah’s awesome hair made Boozer a bit self conscious. Or maybe he was just ready for a new look. (Unfortunately for Boozer, the Gosling haircut seems to be out of the question.

If Boozer’s game suddenly seems more confident, and his scoring and rebounding get back to the levels it was at when he played for the Jazz, we are totally crediting the new hair for it. And we really hope a sports writer has the courage to broach the topic when writing about a Boozer resurgence.

And if nothing else, Boozer might prove to be a hair pioneer for this generation of NBA players. We suspect his old running mate LeBron James might be the next NBA player to unveil some newfound hair (although James seems to have a good sense of humor about it). But let’s be honest, when you’re a rich and successful NBA player, like both Boozer and James are, you really don’t need to give a damn about receding hair. 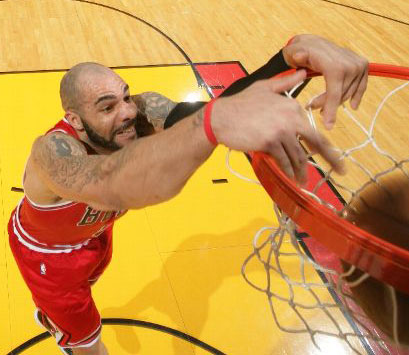 Carlos Boozer's hairline last season: not as full, but clearly not inhibiting him from dunking a basketball.