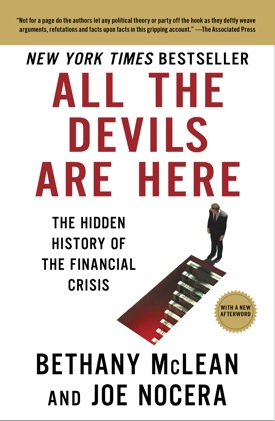 This is part two of our interview with Bethany McLean. You can read the first part here.

Man Up Chicago: With the 2012 Presidential Election about a year away, there will undoubtedly be candidates who promise to fix the economy if they get elected. But really, are there any quick fixes?

Bethany McLean: I don’t think there are any quick fixes. The problem with our economy is structural and its been a long time in the making. And what I mean by that is that if you look at the financial crisis, everyone wants to say it was about home ownership and putting people in homes even if they couldn’t afford them. But it wasn’t. Subprime lending started in the 1990s with cash-out refinancing, allowing people to take credit out on their house. And even at the height of the boom, most of the business of the subprime lenders were people taking cash-out refinances. So what the crisis was about was people living beyond their means, and what was driving our economy was consumer spending. The economy was being propped up by this unnatural ability to spend, which came from people taking the equity out of their homes. So the idea that 2006 was normal, and that some politician can hit a switch and go back to “normal,” it’s just not true. It’s so much deeper than that.

MUCh: There have been public outcries for prison sentences for the major players in the Mortgage-Backed Security Crisis. Where do you stand on the issue?

BM: I understand why there’s this enormous outcry about wanting people to go to jail. I guess, the big problem — and it’s either a good problem or a bad problem — is that there is a big difference between unethical behavior, self delusion and criminal behavior. And seen through that prism, you can actually say its a testament to the justice department that they haven’t brought up charges because the cases haven’t been there.

I can argue [the prison question] either way. I can say, “Oh my god, I can’t believe there hasn’t been a way to prosecute people for these crimes,” or I can say “Wow, I have a lot of respect for the justice department because they didn’t bow to public pressure and bring cases they can’t.” I go either way on any given day. 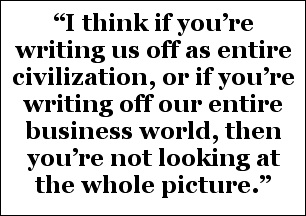 MUCh: You recently wrote that the Too Big to Fail concept with US banks is still alive and well. Why is this still the case?

BM: The government just didn’t have the stomach to break up the banks. There’s a resolution authority law in Dodd-Frank that’s supposed to prevent banks from being too big to fail. It’s supposed to provide a mechanism for them to fail. And I don’t know one person who thinks it actually works.

MUCh: From a business standpoint, does the optimism for social networking companies seem deserved or does it remind you of the Internet bubble in the 90s?

BM: It reminds me a lot of what happened in the mid-to-late ‘90s. But I’m a skeptic, so take what I say with a grain of salt. I understand the argument that the business models [for Internet companies] are better this time around and the capital investment needed is not the same — companies like Pets.com needed hundreds of millions in advertising budgets. This [Internet boom] is not like that. Still, I don’t see a firm foundation for these companies rest on. Look at MySpace. People are very fickle and these [websites] come out of fashion, and I think the privacy issues are huge. And this is more of a statement of hope and not based on anything intellectual, but I hope people’s attitude towards privacy is going to start swinging back, as people start seeing some of the damage that can be inflicted by sharing too much. I can’t help but believe there is going to be some sort of re-think of all this at some point, and some re-think of the business models as privacy laws tighten.

MUCh: And what’s your opinion on the daily deal coupon sites?

BM: There’s just no competitive advantage, right? One of the first rules of business is to have a competitive advantage or to build a moat around your business so that other people can’t do it. Whoever comes around and gives merchants a better deal is going to get more of their business. I don’t see what’s so sustaining and unique about these businesses.

MUCh: Do you ever get depressed by constantly writing about business disasters and financial calamities?

BM: [Laughs.] No, because I get depressed when I’m not interested [in what I write about]. As long as I’m interested, I don’t get depressed. I know that’s a very narcissistic answer, but it’s probably true. Also, even though I don’t always  write about them because I tend to write about business gone wrong, I come across a lot of people who do the right thing. And there are still so many examples in this country of business done well. So while there are things to be depressed about, I think if you’re writing us off as entire civilization, or if you’re writing off our entire business world, then you’re not looking at the whole picture.