Arcade Fire, The National, and Fake Empire: The Song of the Aughts 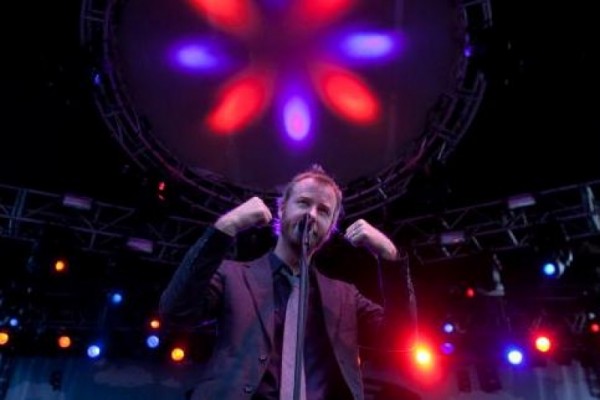 Matt Berninger of The National wrote the most prescient song of the last decade.

Between the three sold-out performances in Chicago and the singing of “Take Me Out to the Ballgame” at Wrigley, it was easy to forget that the Arcade Fire brought along an opening act during their recent romp through the city. The opening act was The National, a band you’ve probably heard of. Maybe you even own a few of their records. The Arcade Fire are arguably the biggest indie band of the aughts and beyond, but it’s The National that produced the most prescient song — indie or otherwise — of this century’s first decade.

The song we’re referring to is “Fake Empire,” and we’ve been thinking about quite a bit for a few reasons, none bigger than the fact The National were just in town. But we’ve also been thinking about Fake Empire because the country is already gearing up for another presidential election. And there are few songs we associate more with the last election — and the circumstances surrounding it — than “Fake Empire.

The song was part of The National’s 2007 album Boxer, and by June of 2008 “Fake Empire” had been released as a single. Not long after that it was being played at Barack Obama rallies, in Barack Obama online campaign videos, and in the background during the 2008 Democratic National Convention. Songs are always up for interpretation, but The National’s lead singer and lyricist Matt Berninger admitted in 2008 interview that song has “political allusions.” The prime lyrical slice of the tune is “we’re half awake in a fake empire,” and while not overtly political, back in 2007 and 2008, it wasn’t unreasonable to think the song was alluding to the disenfranchisement some people felt during George W. Bush’s presidency. We’re guessing the Obama camp picked up on that sentiment as well, and even though the song’s morose tone sounds like eulogy for a fallen nation from the very first trickle of piano notes, it still felt like a rally cry for anyone concerned about the U.S.’s direction during the Bush era.

As “Fake Empire” became part of Obama’s run for president, The National had no problem becoming his indie-rock ringleader. They helped raise money for his campaign coffers by playing a benefit concert and by selling shirts and buttons that featured Obama’s image along with the words “Mr. November” — a title of another The National song.*

The National’s connection to Obama and that brief but optimistic time in our country is enough to make “Fake Empire” one of the aught’s most important songs, and it certainly adds to the songs mystique. But it was about a month after “Fake Empire” was being played at the DNC that the track seemed to take on a whole new meaning. The U.S.’s monumental financial collapse erupted in the fall of ‘08, and the country really found out what it meant to be a fake empire. As the lyrics stated “we’re half awake,” and by the end of the decade, it was obvious the half we weren’t awake for was the financial facade created by an inflated housing market.

The terrorist attacks and subsequent wars of the early aughts might dwarf the real estate bubble in terms of historical significance, but make no mistake: there was no greater symbol of American hubris than the events that led to the housing crisis. America became a fake empire by creating thousands of mini-fake empires that consisted of unoccupied subdivisions full of newly built, cookie-cutter colonials that were purchased solely for flipping. It was hard not to know someone who wasn’t rolling in a decent chunk dough, even though you had no idea why they were so successful. We can’t help but think about the plethora of clubs boasting “bottle service” in Chicago during that era, which we got caught up in regrettably partook in. It was a grand display of conspicuous consumption made by people with suspicious incomes — ourselves included.

The last decade was teeming with fakeness, whether it was a pervasive reality-show and celebrity-obsessed culture that created weird American dreams where bratty teenagers got pop stars to perform at their birthday parties, or “social networks” that were primarily used so people could create an exciting persona and show-off all the kick-ass stuff they were up to. It’s not that there wasn’t good things to come out of the aughts as well, but it often seemed like society and culture was taking a turn for the worse. America was no longer a country that manufactured tangible goods, instead everyone learned to manufacture the illusion of success, posh lifestyles, and convoluted ideals. And then the emergency brake was pulled.

When Obama was inaugurated in January of 2009, unemployment was skyrocketing, bailouts had begun, and his messages of “hope” and “change” were fading from a bold-font headlines to 8-point footnotes. Once upon a time, “Fake Empire” represented disillusionment with President Bush’s wars, lies and cronyism. Then it became an Obama theme song. And finally, at the very end of the decade, it was exactly what it should of been: a funeral tune for a dying America.

In 2010 The National released their latest album, High Violet. It featured a track entitled “I’m Afraid of Everyone,” and during the bands performance at Lollapalooza last year, Matt Berninger dedicated the song  to MSNBC. “I’m Afraid of Everyone” is about literally being afraid of how people — and cable news — reacted to everything that happened after Obama was elected. As Donald Trump rejuvinates the “birther movement,” people scream about gas prices, and Objectivism becomes the guiding principles of the people trying re-write the federal budget, being afraid of everyone still sort of make sense. We like The National, and we think they make some of the best music out there. But we also hope “I’m Afraid of Everyone” doesn’t become the most prescient song of this decade.

* “Mr. November” is from the group’s 2005 album Alligator, and while we don’t think its a political track, it lends itself nicely as a presidential pump-up song. The song’s refrain, “I won’t fuck us over, I’m Mr. November” isn’t kosher for a Democratic (or Republican) National Convention, but in the 2012 election, it’d certainly resonate louder and more profoundly than another round of trite slogans like “Hope.”
[youtube]NBujZr20O6M[/youtube]