“All In: The Poker Movie” Debuts at the Siskel Film Center 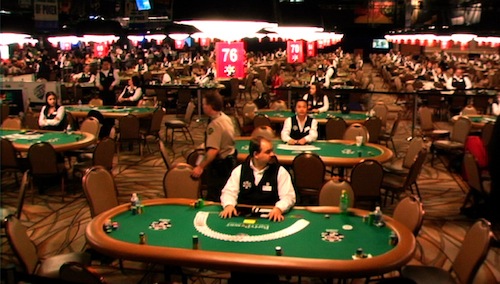 An image of dealers at the WSOP from the documentary "All In: The Poker Movie."

You could argue that “All In: The Poker Movie,” a new documentary about the history of poker, especially its resurgence last decade, would have been best served being released sometime around 2006. In the mid-2000’s, the media’s fascination with poker was at its peak, as regular folks like Chris Moneymaker were winning huge sums of money in poker tournaments.

Of course, by waiting until 2012 to release this film, its director, Douglas Triola, was able to address the government’s crackdown on online poker. Go to one of the massively popular online gambling sites, like Full Tilt Poker, and you’ll find a message on the homepage that says “This domain has been seized by the Federal Bureau of Investigation.”

While the film discusses the day the government shut down online poker sites in the U.S., it also features interviews with a variety of poker pros, like Phil Helmuth and Daniel Negreanu, celebrity poker players like Matt Damon, and journalists like Ira Glass. With help from the interviewees, the documentary relays the role poker plays in society, and the changes the game has undergone this century.

“All In: The Poker Movie” will be playing at 8:15 PM on Monday, April 23 at the Gene Siskel Film Center. Tickets are available via Ticketmaster,  (Sorry, we have winners, so the contest is over).

If you can’t make it to the movie, the digital release of the film is April 24. You can purchase a digital copy for $14.99, or for $19.99, buy a digital version and a DVD. There’s also a deluxe package available if you’re into such things. Visit the “All In: The Poker Movie” website for more details. Trailer for the movie below.